Being in Leh in January is a challenge in itself. The flight from Delhi landed at 10 AM at the Kushok Bakula Rimpochhe Airport at Leh. As the plane taxied off the runway the pilot announced the temperature; -13 degrees celsius. MINUS 13 DEGREES CELSIUS at 10 AM. An Experience of a Lifetime was just about to begin. This would be my first trekking experience at such low temperatures and worse was expected on the Chadar.  For those of you wondering what I am talking about, Chadar is a winter trail in the Zanskar region of Ladakh. This trek is performed on the frozen Zanskar river.

Anyways, I stepped out of the plane and immediately felt the chill hit my face. In spite of it being a beautiful day with a clear blue sky and sharp sunlight, the cold was palpable. It felt like stepping into one of those high altitude lakes in Kashmir. 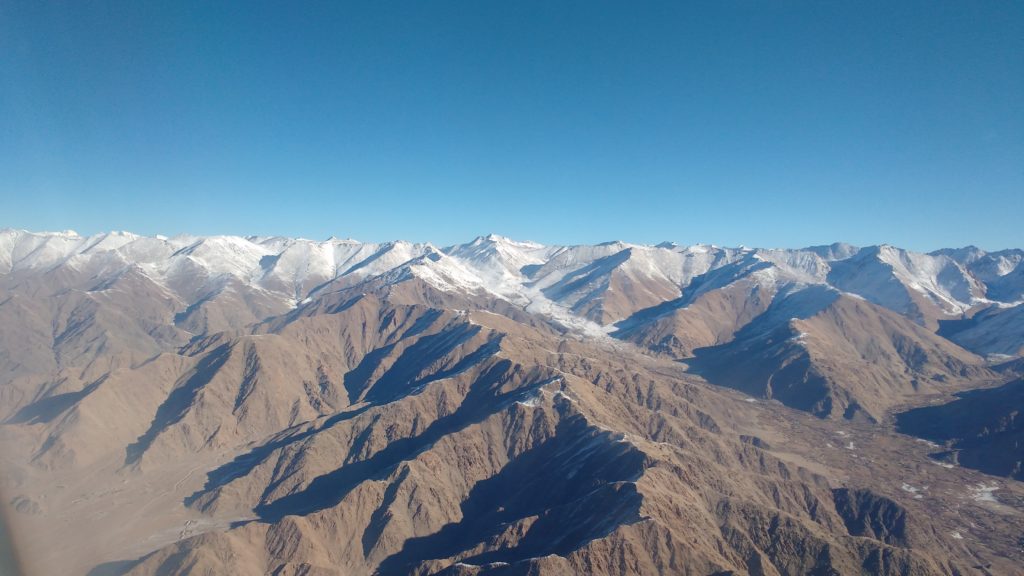 View from the flight

My mind was racing already on whether I would be able to do this? I was to lead a group and this was giving me the jitters.

During the drive to the hotel, we passed through the beautiful town of Leh. It was quite different from what I had experienced in August during the peak season when the roads are crowded with tourists unlike now. Most of Leh is closed in winters except for a few hotels, restaurants and shops.

The next two days were going to help me get acclimatized to this high altitude and low temperatures. With less crowd at this time of year, going sightseeing was the best way to acclimatize and enjoy the city at its best. Soon the trek group I was to lead, arrived and after a briefing session we were all set to leave the next day in high spirits. 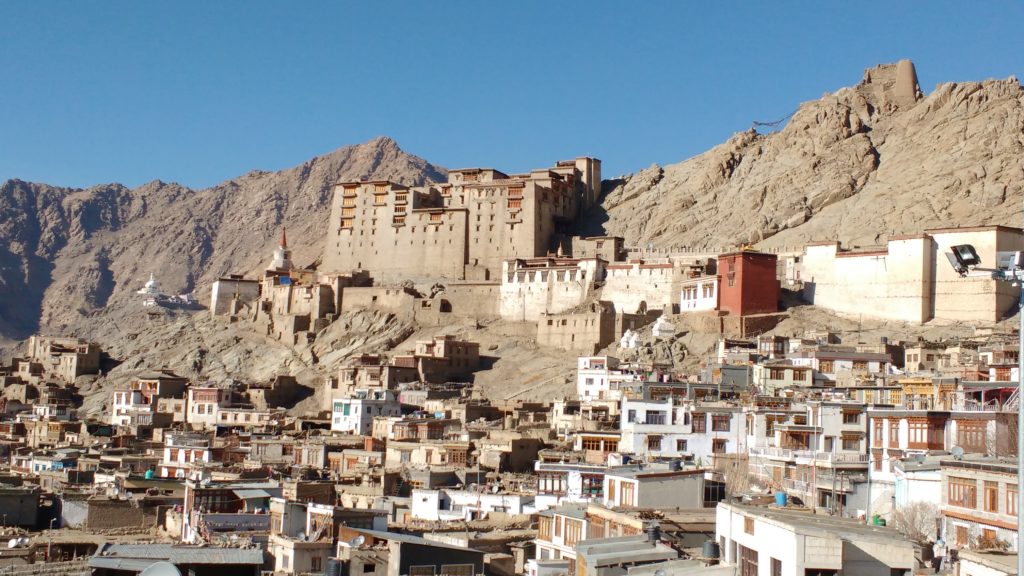 The drive to Tilad Do via Chilling is approximately 65 kms and makes you realize the reason for Ladakh being known as the Cold desert. It is situated at a height of about 3000 metres in Kargil to more than 8000 metres in the Karakoram range, which is the reason for its extremely cold climate. Wide open grounds overshadowed by peaks can be seen. The vastness of the Ladakh valley made me realise how insignificantly small I was in the journey of life. The winding roads have a new sight to offer every now and then. The enchanting beauty of Ladakh ensures that you don’t even blink or yawn lest you miss its beauty. 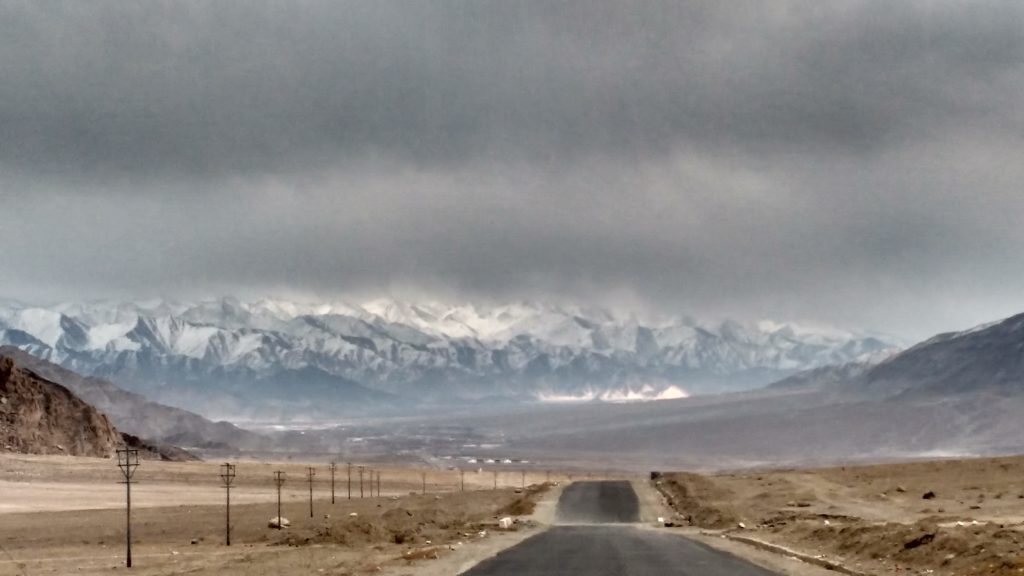 A very well-known landmark in this journey is the confluence of Zanskar and Indus river just a few kms before Nimu.  As you go past the confluence, the road goes along the Zanskar river to the first camp site situated on the bank of the river far below. 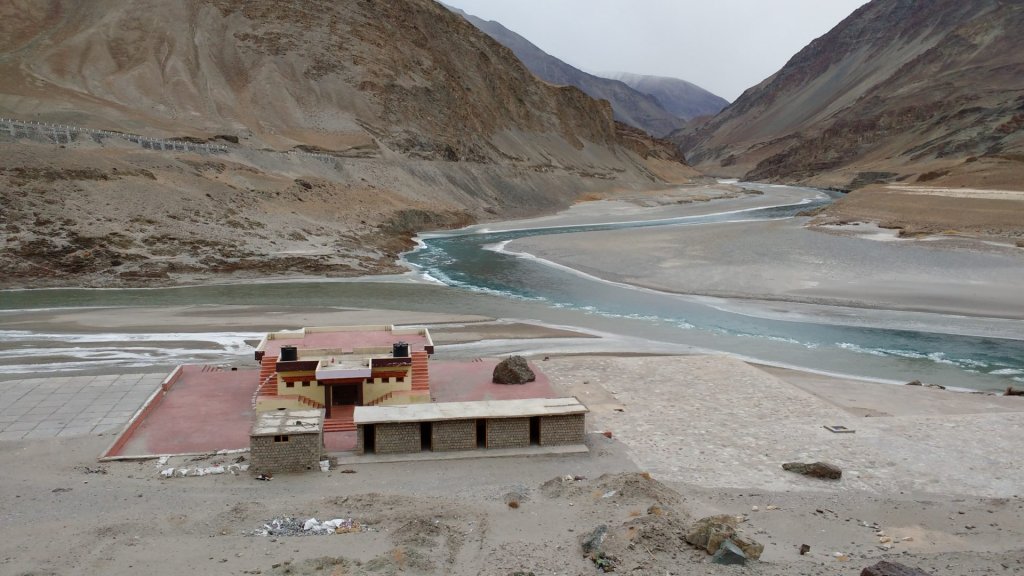 We began climbing down to finally set foot onto the chadar, the frozen river!! The group was so excited that nobody wanted to take rest, Instead, we all decided to go for a walk.  It was immense fun watching people skidding, falling, and playing football with ice pieces.

The stay in the tents was nothing but thrilling and COLD. Even with the warmest sleeping bag and several layers of clothes, I shivered and shuddered to the bone. I realized over the next few days that sleeping in these extreme conditions was not easy.  I missed my cosy little bed back home.

The most awaited journey finally began the next day. After a delicious breakfast, our local guide and I as a sweeper took the group for probably the best experience of their (and our) lives.  To start with, getting used to walking on the ice was a fun filled challenge as it was a combination of skidding, skating, falling and laughing at others. At places the transparency of the ice sheet left me in awe as I could see the rocks right at the bottom of the river. . It was difficult to make out if it was the water flowing or if the entire surface under the feet was frozen solid. It is in times like these that I fail to understand the magnanimity and beauty of nature and its creation.

There are numerous facets to the Zanskar. At times it is frozen solid entirely but sometimes if you don’t watch your step, it breaks and that can be quite scary. I once went waist down trying to find my way as the guide had gone ahead helping others. At times the river flows from this bank to another and then it is best to climb over the sides and by pass those patches.  We even went on narrow stretches like obedient school children, just enough to walk in a single file as the river flowed past. 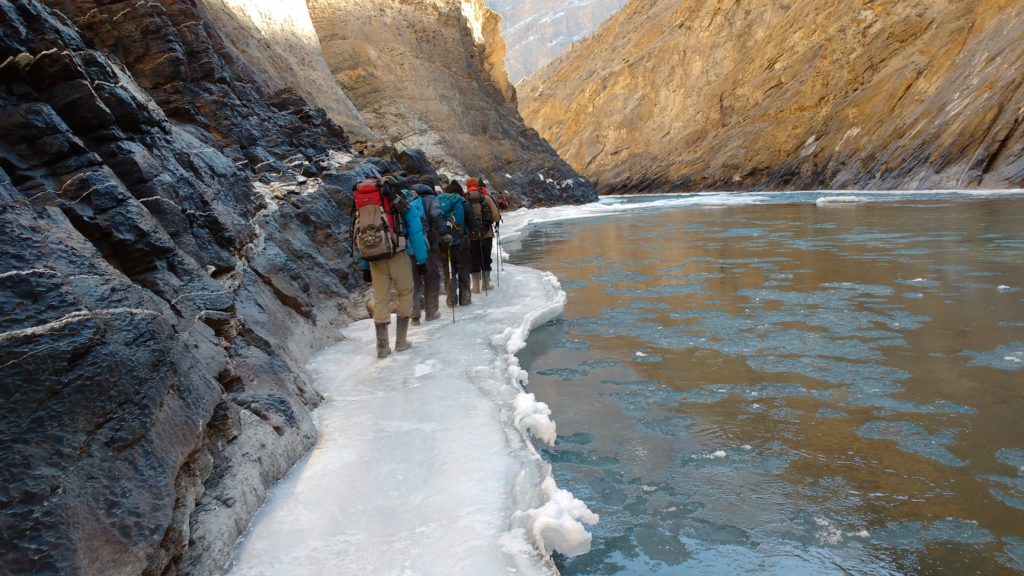 Life on the edge

Three things made me go “WTH” on this trek. One was the frozen waterfalls, second was the frozen river and the third made me go “no way”. That was that the porters actually slept in caves, which were just slightly concave and not deep. They put a fire and had their tea, sang songs and entertained the trekkers with their stories. Can you imagine, it’s -30 degrees and these guys sleep in the open, no tents, and just local blankets to cover themselves?

By the end of the trek I wondered how this river has given way to locals to connect them to the civilization in winters for centuries. Nature is kind and loving. And it is time we learn to respect it.

Taarak Parasher is an adventure freak and holds an MBA in tourism, with adventure as specialization. He’s the founder and owner of Roads & Journeys.

We were a bit terrified as the place was right by a dense forest and full of scary night sounds. Unfortunately, there was no wood around and we had to go over a fence into Read more…

It was a beautiful night in the western ghats. We stared at the sky full of stars but had to think about the dinner at the same time. So we devided ourselves to get the Read more…

One fine day I woke up and decided to go to Karnataka for an adventure. I messaged my usual partners in crime, fixed a date and started packing for the adventure. Well, I fixed a Read more…